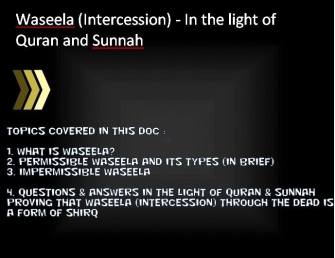 WASEELA or TAWASSUL (Arabic: توسل) literally meaning is seeking closeness. to make a request or supplicate through a means. WASEELA or TAWASSUL are used interchangeably for the same meaning.
The some other meaning that has been mentioned in ARABIC to urdu dictionary are Rasta (way),Zaria (Medium),Taqarrub hasil karne ka zaria (way for seeking closeness). Sometimes it is also translated as Intermediary or Intercession…

Allah himself has permitted and has asked to seek Waseela. That’s why we are seeking Wseela.
Allah Most High says:
يَا أَيُّهَا الَّذِينَ آمَنُوا اتَّقُوا الله وَابْتَغُوا إِلَيْهِ الْوَسِيلَةَ وَجَاهِدُوا فِي سَبِيلِهِ لَعَلَّكُمْ تُفْلِحُونَ
“O you who believe! Fear Allah and seek a means (waseelah) to him” (Surah al-Ma’ida, V: 35)

1.) First type of waseela To make Tawassul with the names and attributes of Allah Taala :

Allah Almighty says
‘And Allah has beautiful names, so call unto Him through them.’ (Surah A’araaf v.180)

2) type of waseela To make Tawassul to Almighty Allah due to one having performed a certain good deed. It is permissible and unanimously accepted.

It is supported by the Hadith of (Sahih Bukhari Volume 3, Book 36, Number 472):in which three people were trapped in a cave. Each of them made Duaa to Allah Taala to move the obstructing rock and they requested Allah Taala to accept their duaas due to some good deed that each of them had done..Umar (ra) sought the Waseela of Abbas (ra)===

3) Third type of Waseela Request to a Pious person who is alive for making dua for the fulfillment of ones need It is permissible and unanimously
as We read in Sahih Bukhari, Kitab al Salat Volume 2, Book 17, Number 123:

Impermissable waseela:– In Islam is Haram to ask Waseela from dead persons.. like Prophet or wali… Proof::—The greatest of wali, the best man after the messengers –

Note: Some may say Abu bakr (RA) said “worshipped” but we don’t worship our awliyas
The word worship is the English translation of the Arabic word يَعْبُدُ (Ya’budu) used by Abu bakr (RA) in the above hadith and obviously he didn’t mean to say “WHO TOOK MUHAMMAD AS GOD” because he was addressing the best of people after the messengers and the best of Muslims ALLAH has ever raised i.e. he was speaking to the Sahabas (May ALLAH be pleased with them all) and obviously the Sahabas didn’t take the Prophet (peace be upon him) as God ( Nauzubillah) because they knew what Tawheed means and no one can follow Islam better than them. What Abu Bakr (RA) actually meant by the phrase “those who worshipped Muhammad” was that those who “relied” upon Muhammad (peace be upon him) for (physical presence) help and other issues as the sahabas used to personally consult the Prophet (peace be upon him) in their daily affairs, and henceforth they would not be able to do the same since he is dead.
Conclusion:1. From the above verses, it is clear that ALLAH (SWT) has made it apparent that the Prophet (peace be upon him) will die (Arabic word used in the Quran verse is Maut) and also that Abu Bakr (RA) “Al Siddique” has called him dead (Maut), in front of hundreds of thousands of Sahabas . Do we love and respect the Prophet (peace be upon him) more than him/them? (Definitely Not)

2. However, our beloved master Prophet Muhammad (peace be upon him) indeed is alive, but not in the human (physical life) form i.e. Various Sahih Ahadith help us understand that he could either be in the stage of Barzakh (the intermediary stage) or in the heavens already but where, how and what – the exact particulars is something between ALLAH and his messenger (peace be upon him) and Allah knows best. Let us focus on the combination of the above mentioned verses and the sahih hadith confirming that ‘Every soul has to taste physical death including Prophet Muhammad (peace be upon him) and the prophets who passed before him and the biggest of awliyas , the sahabas and all those who followed them….