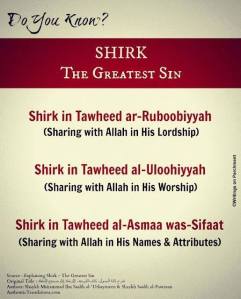 Types of Tawheed are three:

1)Tawheed ar-Ruboobiyyah is singling out Allaah the Exalted with (the actions of) creation, providing sustenance, giving life, causing death, and all of the types of regulation and administration of the dominion of the heavens and earth, and (also) singling Him out, the Exalted, with (the right to) judgement and legislation and sending of the Messengers and revealing of Books. Allaah the Exalted said, “Verily, to Him belongs the creation and the comman, blessed be Allaah, the Lord of the worlds” (al-A`raaf 7:54).

*Is there are creator other than Allaah that provides you with sustenance from the
heavens and earth? There is nothing deserving of worship besides Him alone.
[Soorah Faatir, 35:3]

2)Tawheed al-Uloohiyyah is singling out Allaah with worship so that none besides Him is worshipped, so that none besides Him is called upon, so that no one is sought for rescue, or aid except Him. So that no one is sacrificed to or slaughtered for, or made an oath for, except Him. Allaah the Exalted said, “Say: My prayer, my sacrifice, my life and my death are for Allaah, the Lord of the worlds. He has no partner. This is what I have been commanded with and I am the first of those who submit (to him with Islaam and Tawheed)” (al-An’aam 6:162), and He said, “Therefore turn in prayer to your Lord and sacrifice (to Him only)” (al-Kawthar 108:2).

3)And Tawheed al-Asmaa was-Sifaat is describing Allaah the Most High and naming Him with whatever He described and named Himself with, and with whatever His Messenger (sallAllaahu `alayhi wa sallam) described and named Him with in the authentic narrations – and to affirm that for Allaah without resemblance (to the creation) or likening (to the creation), and without (false) interpretation (of any of that) or negation (of any of that). There is nothing like Him and He is the All-Hearer, the All-Seer.