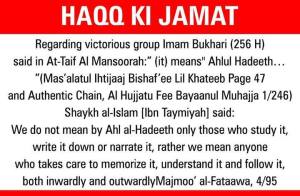 Our Prophet (sallallaahu ’alayhi wa sallam) said, “There will cease to be a Group from my Ummah “victorious upon the truth,“ not being harmed by those who oppose them until the command of Allaah comes about, and they are like that.”]

3.. I was narrated from Mu’aawiyah ibn Abi Sufyaan (may Allaah be pleased with him) that he said: The Messenger of Allaah (peace and blessings of Allaah be upon him) stood among us and said: “Those who came before you of the people of the Book split into seventy-two sects, and this ummah will split into seventy-three: seventy-two in Hell and one in Paradise, and that is the ” ”

–> The Prophet (peace and blessings of Allaah be upon him) described the saved group as thejamaa’ah, i.e., the consensus of the Muslim scholars.
The Word Is Proven From All sahii hadees “At Taif Al Mansoorah OR Firqatun Naajiyah” ( Victorious Group OR Saved Group )..…

And Also Imam Ahmed said “According to us, Ahlul hadeeth is a person that Acts upon a hadeeth” [Manaaqib Al-Imam Ahmed Li Ibn Al Jawzi Pg 208 with Authentic Chain]

6)Imam Shaf’ee (204 H) Said:“Whenever I see a person from the Ashaabul Hadeeth (People of Hadeeth), then it is as if I have seen the Prophet Sallahu Alehi Wassallam “Alive”
(Sharfu Ashaab Ul Hadeeth Lil Khateeb Pg.94, Authentic Chain….

7)Ali bin Abdullah Al Madeeni (234 H), who was the Teacher of Imam Bukhari, said:“They are the “Ahul Hadeeth”

9) Khateeb Baghdadi (463 H) has written a Book on the Virtues of the Ahlul Hadeeth, titled:Sharf Ashaab al-Hadeeth, and also Check Tareekh ul Baghdad 1/224

10)Shaykh al-Islam Ibn Taymiyah (d.728Ah)said:Hence it is clear that the people who most deserve to be called the victorious group are “Ahl al- Hadeeth wa’l-Sunnah”, who have no leader to follow blindly apart from the Messenger of Allah (peace andblessings of Allah be
upon him). They are the most knowledgeable of people concerning his words and deeds,the most able to distinguish between what is sound and what is not [of hadeeth]. Their imams have deep knowledge of that, they are the ones who understand its meanings and are the most sincere in following it.They accept it and believe in it, and act upon it. They show love to those who adopt it and they show enmity to those who oppose it. They are the ones who measure any idea against that which is proven in the Qur’an and Sunnah, so they never adopt any idea and make it one of the basic principles of their religion unless it is proven in that which the Messenger brought. Rather they make that which the Messenger brought,the Qur’an and Sunnah, the foundation and basis of their beliefs. With regard to the issues concerning which people dispute, such as the attributes of Allah, the divine decree, the threat of Hell, the names of  Allah and the principle of enjoining what is good and forbidding what is evil, etc., they refer that to Allah and His Messenger. They examine the general ideas concerning which the different groups dispute, and whatever of these ideas is in accordance with the Qur’an and Sunnah, they approve of it, and whatevergoes against the Qur’an and Sunnah, they reject it.They do not follow conjecture or whims and desires. For following conjecture is ignorance and following whims and desires
without any guidance from Allah is wrong doing.
(Majmoo’ al-Fataawa, 3/347, 348)

And also Sheikh-Ibne Taymiyyah said “We do not take the meaning of Ahlul Hadeeth to just mean the people who heard (ahadeeth), wrote them or narrated them rather we mean anyone who takes care to memorize it, understand it and follow it, both inwardly and outwardly.”[Majmoo’ al-Fataawa, 4/95]

–>>The explanation of Ibn Taymiyyah Rahimahullah proves that Ahlul hadeeth means 2 types of people: The Muhadditheen and their Awaam.

“(And remember) the Day when We shall call together all human beings with their (respective) Imam [their Prophets, or their records of good and bad deeds, or their Holy Books like the Quran, the Taurat (Torah), the Injeel (Gospel), etc.]. So whosoever is given his record in his right hand, such will read their records, and they will not be dealt with unjustly in the least.”

Ibn Katheer (774 H) said in the Tafseer of this Verse in his Most Famous Tafseer ibn Katheer:

“And Some Salafs said: This (verse) is the Greatest honour for the Ashaabul Hadeeth because their Imaam is the Prophet MUHAMMAD Sallaho Alayhi Wassallam”
Tafseer Ibn Katheer Surah Al-Isral Verse 71.

“There is not a Greater honour than that (verse) for the Ashaabul Hadeeth because they Do Not Have an Imaam other than Him (Sal Allahu Alaihi Wasallam)”.
(Tadreeb Ul Raawi 2/126, Noo’27)

Finally –>> Ahlul hadeeth or Ahlus Sunnah are not only Muhadaseen, those who practice on the hadith are also included in them i.e. their “Awam”(General People Also)as said by

4)Ameerul-Mumineen Fil Muhaddaseen Imam Bukhari in Al-Hujjah fee bayaan Al-Muhajja 1/246 ,Imam Bin Hanbal in Fath ul Baari 13/250 and Imam Al-Madeeni in Sunan Tirmidhi H#2999 have stated thatthe Victorious Group OR Saved Sect is Ahlul hadeeth. So if “Ahlul hadeeth” stands for Muhaddaseen ONLY then does this means only the muhadditheen will be going to Jannah and their general public will not go to Jannah?????

1 thought on “Regarding the Victorious Group Imam Al-Bukhari Said : They Are ” Ahlul Hadees “”