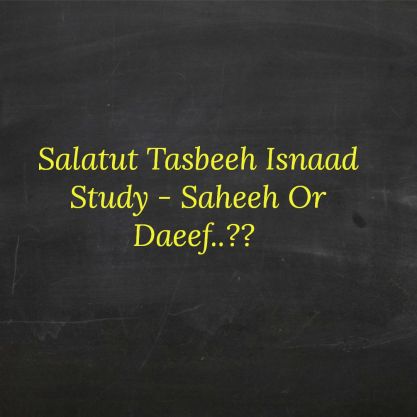 Close to  a year ago I added an interesting topic about Salatu Tasbih which mainly came from the discussions of Imam Al-Albani. At the beginning of its release , I received numerous concerns about the authenticity of the hadith, while others said Imam Muqbil graded the hadith as weak and when I replied that Imam Al-Albani graded it as authentic along with Ibn Salah, the following response was, “ You aren’t accepting the evidence “. Moreover others, hit Google and were redirected to the Islamqa website. Islamqa has become the quick search and find site for many laymen in the World. I went the link sent to me and found a few arguments about the hadith none which were really convincing other than Isnad is weak, therefore, we need to look at it and find out why its weak and are there any other chains that support it, and have other Imams in the past graded it as being Sahih or Hasan?

The arguments from  from Islam Q/A

1.Ibn Quddamah didn’t mention what Al-Khalal mentioned in Ilal about the dialogue between Imam Ahmed and Ali ibn Sa’eed.

2.Imam An-Nawawi’s mention that involves changing the regular format then the same goes for Eid prayer and the Eclipse prayer.

3.Ibn Tayimiyyah’s speech that none of the four Imams spoke about, then we can say knowledge isn’t restricted to these 4 great Imams;therefore what the practiced or mentioned is accepted or reject worship. Furthermore, Imam Ibn Mubarak acted by it an taught it to others.

4.Imam Al-Uthaymeen mentioned the Isnad had some weakness and was shaky, so lets look at it.

The Isnad for this hadith is :

On the surface here the Isnad appears Sahih . Al-Hafith Al-Alaa’I mentioned all the narrators above and their status.

After mentioning the isnad of this hadith Al-Haftih Al-Alaa’I said Ibn Al-Khuzaymah mentioned it in his Sahih. It’s mentioned there # 1216. However Imam Al-‘’Alaa’e failed to mention that  Ibn Khuzaymah pointed to the hadith as being weak by saying, “ If it is Sahih, there is an issue in its isnad.”

There is another chain to this hadith and its narrators are;

Both of these chains connect to Musa ibn Abdil Aziz

Stopping here one issue with this isnad is Musa ibn Abdil Aziz. When we return to the books to check his status we find that some said he was , Trustworthy, weak and even trustworthy with a weak memory. Imam Al-Albani graded him as being honest,but with a weak memory.(saheehah/5/58)and Al-Hafith ibn Hajr said the same thing  in Taqreeb #6988

Imam Al-Mughlatayee in Ikmal Tahtheebil Kamal mentioned that Ibn Shaheen and Ibn Hibban both mentioned him in their books [ Al-Thiqat:The trustworthy narrators] # 4809

On the other side Al-Hafith ibn Hajr mentioned that Ibn Madeeni said Musa ibn Abdil Aziz was weak, while As-Sulaymani said he was Munkar, nonetheless, in returning to Taqreeb he wrote- Trust worthy with a weak memory.

So returning to a few books of weak narrators his name wasn’t mentioned or any reason as to why he might be considered as weak.

The scholars’ speech about this hadith:

Imam Muslim said this isnad is the best for this topic.

Imam Abu Dawud said: There isn’t any hadith for the prayer of Tasbih more authentic than the one from Ikramah on Ibn Abbass.

Imam Ad-Daraqutni said : It’s the most authentic hadith about the virtue of a prayer.

Continuing on Al-Hafith Al-Alaa’I mentioned another hadith and relied on Al-Hakim’s judgement.

Al-Hafith  Al-Hakim and  Al-Alaa’I  both missed that Imam Ad-Darqutni considered Ahmed ibn Dawud ibn Abdil Ghaffar as a liar as Imam Ath-Thahabbi mentioned on his  comments for Al-Hakim’s Al-Mustaddarak. #1197.

Based on the fact that scholars like Imam Muslim and Abu Dawud graded this hadith Sahih it shows a clear contradiction of Imam Ibn Al-Jawzi’s opinion. He mentioned this hadith in his fabricated reports (vol2-pg 146-243).

Ibn Al-Jawzi’ also had a problem with Musa ibn Abdil Aziz as he said he was Unknown. Al-Hafith Al-‘Alaa’I refuted this by saying this wasn’t true; as a numerous amount of trustworthy narrators narrated from him and Ibn Ma’een and An-Nisa’I both graded him as being trustworthy. Moreover there are other isnads for this hadith that weren’t mentioned.

Imam Ahmed’s opinion that changed about the hadith.

Ali replied: There is a chain from Abdullah ibn Amr ibn Al-Aws

Ahmed replied : all of those chains are reported by way of Amr ibn Malik An-Nakiree

Ali replied: Also there is a narration of Mustamar ibn Ar-Rayyan on ibn Amr

Ahmed replied: Who narrated that to you

Ahmed replied : Muslim is a trust worthy sheikh  and it was evident that he accepted and liked that narration. [ Masa’il Ahmed from  his son/pg 89]

Al-Hanabala who considered it a recommended act were:

In conclusion and Allah knows best the issue of the isnad appears to be authentic as Al-Hafith Al’Alaa’broke down and if we take there is weakness in the chain due to Musa ibn Abdil Aziz then there are other reports that strengthen its status to at least Hasan;as Imam At-Tirmthi concluded in his Jami’ # 481. Imam Ibn Al-Wazir in Al-Awsim mentions that there are others chains which add to this hadith’s authenticity and Abdul Ghani authored a book collecting all of its chains and graded as being Sahih himself and Allah knows best.

A Fiqh Study for Salat Al-Tasbih

Here’s a topic we don’t hear too much about and worth looking at to practice it in our short lived lives on this Planet.

The scholars differ if Salat Al –Tasbih is a recommended sunnah act to practice. The Hanafi’ and Shaf’I Jurisprudence view this prayer is a  Sunnah, and the Malikee’s and Hanbali’s don’t consider it a Sunnah.

Shaykh Al-Albani said: The scholars differ over the status of the hadith some say it’s fabricated, others say its Da’eef, Hasan or Sahih.

Shaykh Al-Albani began by mentioning the reasons why the scholars differ about this prayer. There are three categories of Hadith; Sahih, Hasan, and Da’eef. Sahih and Hasan both are authentic and there is a category which other narrations strengthen the status of these two: Sahih Li Ghayrahi and Hasan Li Ghayrahi.

1: The hadith has been narrated and collected by Abu Dawud in his Sunnan and others. The people of knowledge say that when a hadith doesn’t have a narrator in its isnad known for lying or even accused as a liar, then this kind of hadith can be supported for its strength by way of other chains. There are several other narrations for the Tasbih  prayer.

2: Abdullah ibn Al-Mubarak used to act by this hadith. He was from among the senior scholars of the Salaf, and if this hadith wasn’t authentic; then there is  no way he would have acted by it. (2)

Imam Al-Albani established 2 principles for the Muslim who looks at evidence. The 1st thing he mentioned and proved was just because a hadith is weak in one isnad doesn’t mean it’s unauthentic, as there can be other narrations to support it. Then the 2nd point the Shaykh highlighted was the actions of the Salaf can be followed, in particularly those Imams who were known to be erudites in Jurisprudence.

Ibn Jawzi and Ibn Taymiyyah considered this hadith to be a forged report since the wording of the hadith was strange.

Imam Al-Albani said: Ibn Jawzi and Ibn Taymiyyah held the opinion that text of the hadith was strange about the virtue of a prayer only offered once in a lifetime. Moreover, they said the Tasbih prayer doesn’t resemble the other well-known prayers from authentic sources. These two things lead them to say the hadith was fabricated. Anyone who looks at this hadith and the various narrations recorded will not say the hadith is fabricated and I don’t believe that Ibn Jawzi and Ibn Taymiyyah did that. (3)

Although Ibn Jawzi and Ibn Taymiyyah are great Imams Shaykh Imam Al-Albani explained how their statement for Salat Al-Tasbih as a forged report isn’t possible, since there were other chains which support each other, and their opinion was built on the matn of the hadith illustrating a seemingly strange description for the prayer.

Imam Al-Albani said: The irregular way this prayer is performed or mentioned isn’t a means to consider the hadith to be unacceptable. We are aware that there are other prayers done during the life time of the Prophet (ﷺ) such as the eclipse prayer which isn’t offered in the fashion the other prayers are.

Did the Prophet (ﷺ) ever offer this prayer?

Imam Al-Albani said: The Prophet (ﷺ) never prayed Salat Al-Tasbih himself; but urged his uncle to pray it.

The description for this prayer:

Imam Al-Albani said: Salat Al-Tasbih is done just like the rest of the other prayers except in every rakah there is 75 Tasbih said totaling 300.

In the first rakah before bowing the slave says:

Then he goes into Ruku and says

Then he says while standing

And the sitting between the 2 Sujud’s he says

Concluding here, this prayer was practiced by Imam Abdullah ibn Al-Mubarak [181H] and based on the numerous reports collected the scholars past and present have said this hadith is authentic. Ibn As-Salah said this prayer is a Sunnah and not a Bid’ah and can be offered sometimes in a congregation.(5)Therefore, why not offer this prayer  once day, or  then once weekly and if you can’t do that, then how about  once a month; if not, then do it yearly and if you are unable to carry that out, then do it  once in your lifetime ,after reading this article and remember the reward from Allah for doing so. Allah knows best