….The third affair of strangeness is that a desciple (mureed)  of Hadhrath Ghaws-al-Aadham ( referring to Shaykh Abd al Qaadir Jeelaanee rahimahullah which means Very Great Helper – This is why they invoke him in the times of need not just at his grave but anywhere, everywhere! Other Awliyaa and Saaliheen and Ambiyaa are considered just helpers but he is considered the greatest aider in the times of distress) narrated a strange incident which is quite astonishing which most probably I have come across in some book of Shaykh Abd-al-Haq Muhaddith Dehlavi.

That once Hadhrath Ghaws-al-Aadham rahimahullah woke up in accordance with his mundane schedule for Salaah at-Thahajjud and stepped out of his monasterial hermitage (Khaankhaah) and this khaadim (desciple) aswell got together with him. After walking for a while they reached a town and soon afterwards entered a house in which there was a congregation and those people stood up after seeing him and he (the Shaykh rahimahullah) seated himself in a position while the desciple also seated himself in a corner.

From a nearby chamber there could be heard a patient’s groaning voice and after sometime this voice disappeared and four people exited (the chamber) with a janaazah and accompanied with them was an old person and this janaazah was placed in front of Hazrath (Shaykh Abd al-Qaadir) and he offered janaazah prayer soon after that congregation took the janaazah and left. The Shaykh got back to his previous position.

When the congregation had left, soon after a person who was a Christian appeared. Hadhrath pulled out the cross hanging on his neck and broke its chain and made him recite the Kalimah and then addressed the congregation that he (this new muslim) is (now) such and such headed back to his hermitage.

After reaching his place he became busy in Salaah at-Thahajjud. After the night passed, this mureed (desciple) questioned Hadhrath as to what the issue was concerning the incident the previous night. Hadhrath said,  that the maqaam to which we had been was a town named Mawsil and that congregation was the jamaah of Abdaal ( A soofee terminology; their belief is that all the affairs of this universe are governed by Abdaal who are human beings and whenever one of them dies, there is a replacement and their number remains fixed) and that ailing person was one of them and they communicated to me spiritually (baathinee – soofees believe their saints have super natural ways to communicate that are far above general human abilities)  that he shall be dying very soon and they requested him to be replaced. This is why I had been there and when he died then I requested Allaah to appoint someone in his place. Then there was an Order from Allaah that in Rome, a Christian  is immersed in worshipping the cross, so he should be appointed as a replacement for the dead person.

Then I asked (Allaah) as to how should his appearance here be requested? He then appeared in a strange abnormal miraculous way and immediately he was converted to a Muslim and placed on the position of abdaal and the message was conveyed that no one should be proud of one’s class/elegance and everything is restricted to My (Allaah’s) Fadhl. 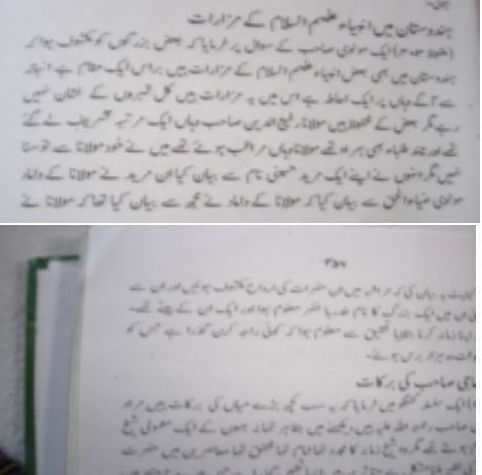 Presence Of Graves Of The Ambiyaa alaihim us salaam In India

Some of the noble ones (buzurg)  received kashf (hidden ghayb) that even in India also there are shrines (graves) of certain ambiyaa alaihim us salaam and there is a place after Ambaala (name of a place) there is an enclosure and in it there are these graves/shrines. The signs of these graves have not remained intact of all these graves but for some of them the signs still remain. Maulana Rafee uddeen once visited that place and some students aswell accompanied him and maulana became a MURAAQIB ( Devotee of the grave who medidates at the grave to receive hidden knowledge from the souls and enguages in communication with the dead souls) there and I did not hear from the Mawlaana directly but he mentioned it to his soofi-desciple (mureed) named Hussaini , and this mureed (follower of a peer – soofee shaykh) mentioned it to the son-in law of the Maulana and his son-in-law mentioned it to me that Maulana described the kayfiyah (state) of receiving kashf (hidden ghayb) – the souls of those noble ones (those alleged Prophets) enguaged in a spiritual connection with the Maulana and he met them and it came to be known that from among them one noble person’s name was Khidr or Khidhr and one other was his son (named) Ibraaheem and he informed that his era was Karnaa. With a rigorous research it was found that there was a King Karan (Raja Karan) who lived there and passed away approximately 2000 years from now.

[Note:- Raja Karna is the one mentioned in the hindu religious scriptures, whose city is very close to Ambala]

1. Deobandee maulvees become Muraaqib at the graves (known or maj’hool).
2. Receive Kashf from the graves by enguaging in discussion with the dead souls.
3. Dead souls give the living deobandees knowledge of unseen.
4. Through Kashf deobandees come to know things that only Prophets were able to know through revelation. Like names of the Prophets that neither Allaah nor His Messenger Sallallahu Alaihi Wa Sallam have informed us, their location of graves, etc.
5. Deobandee maulvees dont have any shame to declare a Prophet named Ibrahim during the time of Raja Karna without any evidence from either the Qur’aan or the Sunnah but by way of Kashf!!!